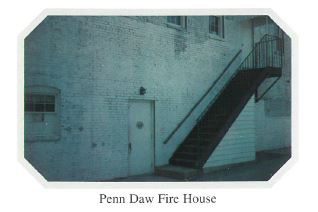 Bethany Lutheran Church began as a mission child of Immanuel Lutheran in Alexandria and had its first worship service in the humble hall of the Penn Daw Fire Department under the guidance and shepherding of Pastor W. Mensing. In 1951, land on Beacon Hill Road and Oak Drive was purchased as the future home of a new church. The following year all 56 original members adopted a constitution establishing “Bethany Lutheran Church.” It became a member of the Lutheran Church - Missouri Synod (LCMS) in June of 1953 at the Triennial Convention.

Bethany Lutheran’s first building was begun in 1952 on Beacon Hill Road, with the construction of the chapel, or the “White Building” as it was fondly remembered. Amazingly, this building was largely the labor of the members themselves and had little professional help. The first service to be celebrated in the new church was on Christmas Eve of the same year. However, it would not be until August 9, 1953 that it was officially dedicated. Between 1952 and 1954, Vicar Waldemar Petzholdt and Vicar Richard Tremain worked under the guidance of Pastor Mensing to settle the congregation into its new home, organize it, and take over some of the shepherding duties.

On July 18, 1954, Bethany called its first pastor, John Graudin, and he brought his wife, Earlene, with him. It did not take long, under their care, for the vibrant and rapidly growing Bethany congregation to outgrow the little “White Building.” In 1956, the Fellowship Hall was built to accommodate the congregation’s growing needs. A prominent Bethany tradition that has continued to this very day was also started during this time under Pastor Graudin. Easter Sunrise Service at Mt. Comfort Cemetery has been a fixture of Bethany tradition since Easter of 1955. It has even been mentioned in Alexandria, VA travel guides and was broadcast over local radio in the past. Bethany’s active presence in the community and its dedication to its members helped it to prosper over the next few years, and by 1961, more room was once again needed. Adjoining land on Beacon Hill Road was purchased for the construction of the present sanctuary, church offices, and nursery, which were dedicated on June 3, 1963. 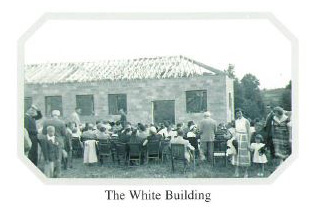 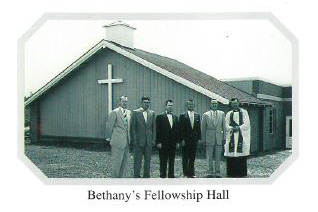 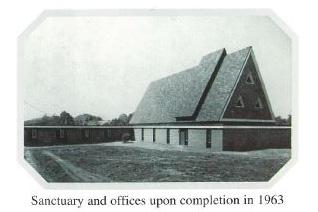 During the growing years, the congregation continued to grow and develop its outreach programs, including a Christian Day School (in 1959), consisting of one Kindergarten class, and a Vacation Bible School, which continues to take place every summer. Other important developments during this time included the installation of the first organ in the Sanctuary balcony, which continues to be an important feature in Bethany’s Worship services, the construction of the kitchen, and the expanding of communion services to twice per month. By 1973, Bethany had 418 communicant members and 688 souls under the Pastor’s care. It was decided, after a voters’ meeting that same year, that Rev. William Hecht would serve as a part-time Assistant Pastor to help.

In 1979, Pastor Graudin was called to another mission congregation in Summerville, SC. Pastor John Zeile was installed in March of the following year. Pastor Zeile served the Bethany congregation for 11 years and oversaw yet another expansion, with the addition of the Education Wing in 1991. This building is most familiarly recognized as the current Bethany Lutheran Preschool and took the place of the little “White Building”, which contributed its foundation, if not its walls, to the Education Wing. In 1992, Pastor Zeile accepted the call to a congregation in Stuart, FL, and Pastor Karl K. Schmidt was installed as the third Pastor of Bethany. Pastor Schmidt had previously worked in the Southeastern District of the LCMS before coming to Bethany and would serve for the next 14 years as Bethany’s shepherd. His time at the congregation saw the training of several vicars, the expansion of the Preschool program, creation of the African Immigrant Ministry, and the hiring of a Director of Christian Growth, Tsedal Tuquabo, who expanded the Small Group Ministry and helped to integrate current and new members into active roles in the church. 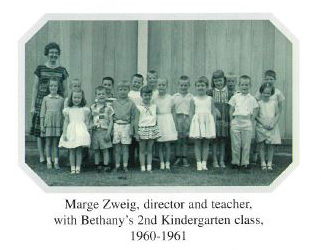 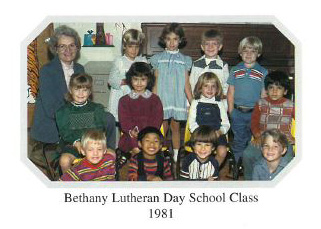 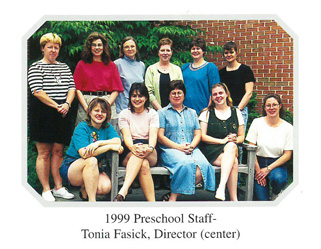 Pastor Karl Schmidt retired in 2006 and was followed by the current pastor, Rev. Andrew W. Jagow, who was installed in February, 2007. Since 2007, Bethany has worked hard to strengthen its relationships to both the outside community and the congregation. In-reaching efforts implemented during Pastor Jagow’s early years included the creation of the Shepherd Program and the nurturing of its bond with the African Immigrant Ministry (A.I.M.) mission. Rev. Joseph Davis, who was selected as leader from among the A.I.M. members, completed his vicarage under Pastor Jagow’s mentorship and was ordained as a Special Missions Pastor.

Notable outreach programs realized during the last decade included the Hearts and Hands mission group,which has visited Haiti several times along with Joplin, MO, Henryville, IN, and Crisfield, MD. Individuals have also completed missions to Macau, El Salvador, Belize, Nicaragua, Uganda, and Beijing. More local outreach programs include the annual Spring Fling and Oktoberfest and a monthly partnership with the Grate Patrol, coordinated by George and Mary B. Stoll. But most of all, the Preschool has been a means of local outreach for over 50 years. In 2018, Antonia Fasick retired after 30 years of service, and the Preschool is now being guided by new Director Olivia Taylor. Bethany Lutheran Preschool can currently boast that it has full enrollment with a very dynamic group of children and staff, and the school continues to grow and reach out to the community with early childhood Christian education programs that include Mom’s Day Out drop-in child care for ages 12 months to 2½ years, toddler classes, 3- and 4-year-old classes, and prekindergarten through 4- and 5-year-old classes. It is the hope of Bethany that we will continue to be a presence in the community and spread God’s love and Word.


Restructuring of Bethany and the Five-year Plan

In 2015, Bethany Lutheran Church underwent a restructuring process, and after many hours and months of hardwork, developed a Five-year Plan, which was adopted in 2016. For more on our mission and current five-year plan, click here