LCMS – What Does This Mean?

Bethany is a part of the Lutheran Church – Missouri Synod 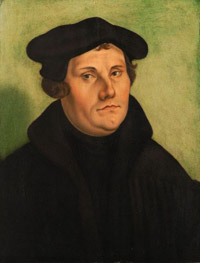 The name of the denomination is derived from the Reformation’s most influential man, Martin Luther, by those who followed his teachings. Interestingly, Martin went from studying law, to being a pious monk in one of the strictest orders, to being a professor and pastor in the small university town of Wittenberg, Germany. It was as a pastor and professor that he objected to the selling of indulgences in the neighboring town. He was incensed when people came to him claiming that they had forgiveness or were able to save a relative because they had bought a piece of paper. In the 16th century, when Luther’s objections to these practices and teachings were circulated in the 95 Theses, it started a movement to reform the church. From that movement, we have numerous blessings that we still celebrate in the Lutheran church today.

First, the Reformation helped the church reclaim some core teachings of the Bible. For instance, we believe that the Bible is divided into two messages, Law and Gospel, that there is a priesthood of all believers called to serve God daily in our vocations, and that true authority in the church is given to God through His Word. After the 95 theses, these core teachings were published in a series of Martin Luther’s writings – "The Babylonian Captivity of the Church", "An Appeal to the Ruling Class of Germany", and the "Two Kinds of Righteousness".

Luther was brought to trial for his teachings in the German city of Worms, where he stood before the Emperor, several Princes, and Church officials and was asked to recant all the things he wrote. He famously said that he could not, unless he was shown from reason and Scripture where he was wrong. He is quoted as saying, "Here I stand, God help me." Not long after the trial, Martin was seized in the woods while on his way home. It happened that his prince, Prince Frederick, arranged to have Luther kidnapped and taken to his brother’s castle, the Wartburg. While there, Luther translated the New Testament into German so that people could read the deeds and words of Christ on their own. Prior to that, the Bible was accessible only to those who could speak Latin.

What do you think of when you hear the word “church”? How would you define it? Lutherans had to think about that a lot after the break from the Roman Catholic Church. 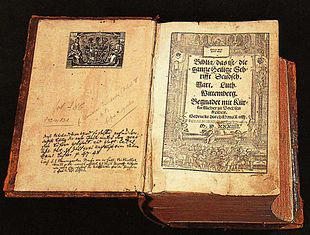 What was a church? Looking at Luther’s writings, people thought of membership in terms of faith. Faith is what made one a member. Since you cannot see the faith in someone’s heart, there is a sense that the church right now is invisible. Yet there is a building and people are gathering in worship, and in that sense, you can see a visible church.

Did a church have to have Bishops or a Pope? Did it have to be in a building with a steeple? What were the essential things? The Reformers would spell this out in the Augsburg Confession, article 7 – “It is enough” that the church teach the true Gospel and distribute the sacraments (Baptism and the Lord’s Supper) correctly. Everything else may be different from place to place and time to time.

Here are some of the words we confess in the Nicene Creed (what is a creed?). What do these words mean to you?

Here are some words Martin Luther uses in his Small Catechism to describe the work of the Holy Spirit. The Spirit calls people — that is, we are converted to the faith. The Spirit gathers us together. God has a plan (!) and sanctifies us, that is, the Spirit cleanses us, sets us aside for a purpose, and then gifts us to serve the Lord in whatever way we can. 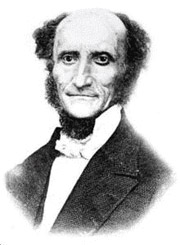 America is the land of freedom, and in the early 1800s, a group of Germans who were persecuted for being ‘too Lutheran’ came seeking religious freedom by sailing to New Orleans and then settling in St. Louis. Essentially, these Germans were persecuted for not going along with the Prussian Union, which was a forced merger between Lutherans and Reform in Saxony and Prussia (modern Germany). As they were settling, however, a discovery was made about their first bishop, Martin Stephan. Some young girls claimed that there had been inappropriate contact initiated by Stephan, and after investigating the matter, the small community sent its first bishop into exile. This led to a crisis and the major question, "Can there be a church without a Bishop?" Looking at the writings of Martin Luther, the Rev. C.F.W. Walther helped the members of the new community reclaim their vocation as priests. His writings were circulated in a German publication called "Der Lutheraner", and not only did this help cement his young community together, but also other Lutherans in the U.S. read them and said “Jawohl!” Those who agreed met in a first Synod, which, until recently, was named after some of the first states to participate. Only the name of Missouri remains. 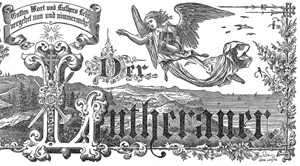 This word comes from the Greek and means "walking together". The "Syn" part means "with" and the Greek word "hodos" has to do with being on a journey and on the road. ‘Synod’ is a fitting word to use for a gathering of believers, since the first Christians were known as "followers of the Way" (Acts 9:2, 11:26). Those who first chose to “walk together” with Walther and the other Lutheran pastors in Perry County were united in their beliefs. Others joined this group of Lutherans because they were eager to spread the Gospel in the new land of America. Several had answered the call of F.C.D. Wyneken, who surveyed the situation in America and wrote an appeal for help, saying: “Imagine thousands of families spread out over this wide stretch of land—the parents go on and die without hearing God’s Word; no one awakens or warns them, no one consoles them. … Therefore my appeal to your hearts: help in the name of Jesus! Help, because the need is ever more urgent. What will become of our brethren in 10 or 20 years if there is no help?” So, walking together in mission and in doctrine, the German Evangelical Lutheran Synod of Missouri, Ohio and Other States began and continues through today as the Lutheran Church - Missouri Synod.

NOTE: The quote from F.C.D. Wyneken letter is from the article "A Synod Is Born" written by William J. Shmelder for the April 1997 issue of Lutheran Witness.